Sink or Swim in a Sea of White 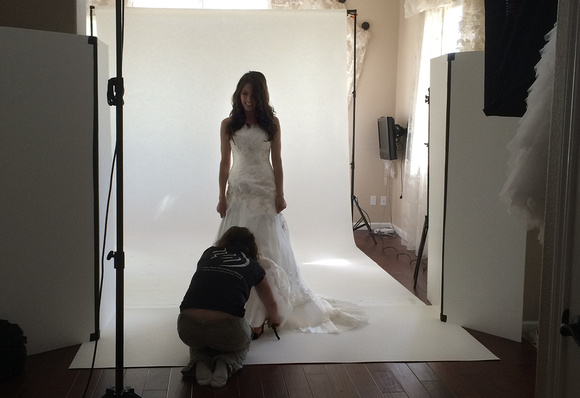 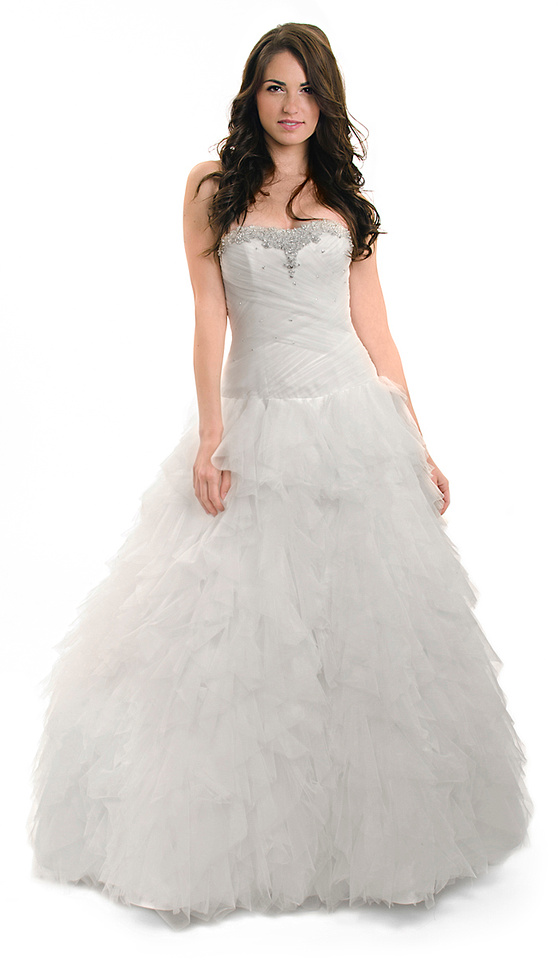 Back in June we had our first shoot with our newest client, whom I mentioned in a previous post. They manufacture wedding and bridesmaids gowns for wholesale distribution to Bridal Boutiques. I wish I had known about them when we were still in the bridal business, because their work is fantastic and at prices much lower than the big names.

The project originally called for about a half day of lifestyle photos near our house in Hayward, nothing too complicated. It seemed like a great get-to-know-you shoot. A week later we were planning for the complete opposite. Our simple lifestyle shoot had evolved into one of the most complex catalog shoots I have worked on. Two professional models, stylist, makeup, catered, and the kicker: the setup is white wedding dresses on a seamless white background. A floor-to-ceiling seamless white backdrop is hard enough to pull off under the best conditions, but in a living room with a white subject is basically like trying to defy the laws of physics. Lighting one white object properly, while overexposing another that is right next to it is somewhat problematic. After about an hour of setup, it was go time... ready or not.

The first fact I had to accept is that there was almost no way to get this perfect on in camera. I much prefer to get it as close to perfect in camera as possible, but this just couldn’t happen. Photoshop would have to be a close partner on this one. The second was that with over 50 dresses on the list, the pacing was going to be fast. Like, a dress every 5 to 8 minutes fast. No time to reposition lights and move the model. Once she is set, and the dress is arranged, that is it.

So I setup the backdrops using the now famous Zack Arias method, but without the reflective tile board. Instead I used a panel of 1/16” white polywall for the footing. The backdrops were lit on either side and I actually had to bounce some light off the ceilings to get the floor white all the way to the subject. Then I used a large soft box to light the top half of the dress, and a PLM to hit the feet. This gave me the ability to light the dress with 2 different zones, which turned out to be the key to making this all work.

I could not have been happier with the results. Not only was I getting the blown out white I wanted, but I had control over how the dress interacted with both the background and the floor. And the talent… oh the talent! These girls were amazing. There were several times when I would ask one of them to move her arm, or her hair, and would have to ask her to move it back because by the time the words had left my mouth she had already done it. A good model is reading me as much as I am reading her, and it makes everything about a billion times easer.

This was seriously one of the best commercial experiences I have ever had. The pictures are wonderful, the talent is happy, and the client not only loves her photos but asks me, “So how much more do I owe you, since the project is different than we discussed?”

Could anything else go right here?